Regenerative Medicine
Regenerative medicine is a medical approach for regenerating human tissues/organs and restoring lost functions after injury, disease, or surgical treatment.
It includes the rehabilitation, the use of artificial body parts and the transplantation of living human tissues/organs.
Regenerative medicine using stem cells is drawing attention recently since stem cell research has been progressing along with the improvement of techniques for cell cultivation and the development of genetic and tissue engineering.
Stem cells have the abilities to undergo self-renewal with maintaining the undifferentiated state and to differentiate into specific cells; therefore regenerative medicine using stem cells has the potential to provide a novel effective therapy for repairing damaged parts of the body and for reducing physical and mental burdens in patients.

Stem Cells
Stem cells are distinguished from other cell types by two important characteristics.
First, they are unspecialized cells capable of renewing themselves through cell division. Second, they can be induced to differentiate into tissue- or organ-specific cells with special functions.

( ii ) Embryonic stem cells ( ES cells )
ES cells are pluripotent stem cells derived from the inner cell mass of an early stage preimplantation embryo. They have the capability of developing into any kind of cell in the human body, except for the extraembryonic structures ( e.g. placenta ).

Among these stem cells, “( i ) Adult stem cells” is mostly available in the medical treatment at present for the following reasons.

Since the generation of ES cells involves destruction of the allogeneic pre-implantation stage embryo, ethical issues and immune rejection problems after transplantation have yet to be solved for the clinical application of ES cells.
In transplantation of iPS cell-derived tissues, a risk of tumor formation, probably due to contamination of the undifferentiated stem cells or genetic lesions in reprogrammed cells, has been pointed out. Although this issue is being solved and clinical trials using iPS cells are being planned and conducted, iPS cells have not yet been put to practical use in regenerative medical treatment at present. 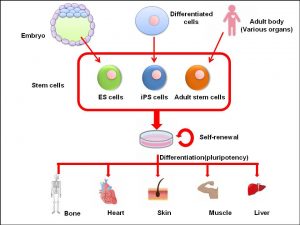